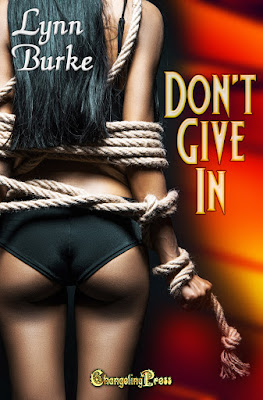 Don’t Give In
Darkest Desires #2
by Lynn Burke
Publisher: Changeling Press
Release Date: September 21, 2018
Keywords:  #BDSM #EroticRomance #Contemporary #Novella #Series
*Warning: Bondage, Spanking
Nothing like being thrown into a stranger’s arms on the subway to make a woman realize what she’s been missing. The dominance in the hunk's eyes reminds Stacey Lauren of her secret, dark desire to be bound. Used. The lifestyle she dreamed of before finding a safe existence. One she refuses her impulsiveness to give in to. Stacey’s submissive nature and large, doe-like eyes makes Devon Smith hunger to tie her up. Have her at his mercy, begging for release. She’s everything he's ever wanted, and even though she's all but engaged, nothing will stop him from taking her. ​ Will Stacey have the courage to surrender herself to Devon, or will her aspiration for a guarded life keep them from the one thing they both long for?

PURCHASE LINKS:
Changeling Press: https://www.changelingpress.com/don-t-give-in-darkest-desires-2-b-2764
Amazon: https://www.amazon.com/dp/B07H3DP8DF
B&N: https://www.barnesandnoble.com/w/dont-give-in-lynn-burke/1129474783?ean=2940161969250
Kobo: https://www.kobo.com/us/en/ebook/don-t-give-in
iTunes: https://itunes.apple.com/us/book/dont-give-in/id1435152431?ls=1&mt=11
EXCERPT:
I never met a man whose presence alone made me lose all train of thought. Mute. Total brain shut down because of raging hormonal takeover. He looked like a young Jude Law with those lips, that jaw, and mischievous green eyes… Someone jostled me from behind as the subway train jerked into motion again, pressing me even tighter against the hotness who’d stolen my tongue. I stared up -- at least a foot -- at his gorgeous face. A model’s face. Absolute perfection. His lips quirked. Oh God… Forget a panty-melting smile. We’re talking lethal, instantly burst into flames, incinerating crooked smirk. “Hey.” His low, sexy voice with just a hint of southern twang quivered through my belly. I nearly swooned and locked my knees to keep upright. My arms in front of me, cell phone in hand, pressed against his rock-hard pecs encased in a gray-green Henley. Still smiling, his eyes twinkling with an “I know what I do to you” knowing glint, he plucked my phone from my fingers. I didn’t have a screen lock. He swiped and tapped while I stared at his mouth, the din of voices and rush of the metal on metal train a din in my ears. He licked his lower lip. Sucked that plump temptation between his teeth. Good God Almighty. He pulled a ringing cell from his back pocket, smirked at me again, swiped, and tucked it back while sliding mine once more between my fingers that still rested on his chest. “Charles Center Station,” a voice squawked over the train’s speaker. The car jerked again, and his palms burned through my scrubs at my waist as he steadied me. One squeeze on my left hip bone, and the sexy mystery man moved off with the crowd exiting the swished-open doors. For the first time in five years, I’d gotten on a different car of the Metro. Not the first one in line like always. No. I’d been late because of fighting with Kyle and hopped through the closest open train door. I craned my neck to watch the mystery man through the hazy window. He disappeared into the throng of the early morning madness of people vying for the escalator to take them up into Baltimore. A step took me closer to the window. Our gazes collided as he glided upward, and awareness of my need swept through me. Desire like I’d never known. He disappeared from sight. The breath fled from my lungs, and I deflated. Holy shit… I glanced down at my phone, double tapped with a shaking finger, and swiped to bring the screen up. Devon Smith. He’d added his contact info. He’d also called his phone from mine so he’d have my number. I shouldn’t have been giddy, dumbstruck like a teenage girl. I was practically engaged for Christ’s sake, to a man as vanilla as the bean. As boring and safe as I could find. Kyle had left our townhouse in Owings Mills that morning at the same time I had. Travel mugs of coffee in our hands, a peck on the cheek in an attempt at normalcy after our fight, going different directions for most of the day. Devon… I glanced at his name on my cell’s screen again and groaned. “Next stop… Johns Hopkins Hospital,” the squawker sounded again. And a long ass day sucking dark red blood into vials. Shaking my head, I drew a deep breath trying to fortify myself and bring my wayward hormones back in line with the calm existence I’d chosen to keep myself out of trouble. My college years hadn’t gone so well, partying with my bestie, underage drinking. Typical “finding yourself” youngster stuff, but my choices had caused serious damage. I stepped off the train and paused as people pushed past me. Jaw clenched, trying to rein in my mind, I shot off a text to my long-time, live-in boyfriend. Sorry about this morning. Looking forward to tonight’s party. A little heart-eyed emoji accompanied my words because it would help soothe things over -- not because of any lovey-dovey bubbles in my belly -- and I turned my thoughts on the sequined, blue dress I’d gotten for his company’s dinner that night. A twenty-five year celebration of their existence -- and an excuse to get dolled up, something Kyle and I never did. Then again, we never did anything out of the norm. I’d grown antsy the previous couple of months, especially since Kyle dealt with major stress at work and oftentimes got short with me for no reason whatsoever, just like what had happened that morning. But we’d been together for so long. We’d settled into a comfortable relationship, one that wasn’t all passion and rainbows, but hey… at least we had each other. I forced a smile onto my face and pushed into the office. Chatting with co-workers and patients who needed to have blood drawn and sent to the lab needed to be my focus. A ho-hum job, one I didn’t mind, one that paid my half of the bills. Telling myself that Devon Smith had simply been a blip on my life’s radar sounded like a lie to my own inner ear. © Lynn Burke 2018