This post is part of a virtual book tour organized by Goddess Fish Promotions. Carol Kilgore will be awarding a $50 Amazon/BN GC to a randomly drawn winner via rafflecopter during the tour. Click on the tour banner to see the other stops on the tour. 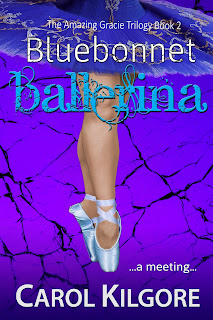 Gracie Hofner returns, and chaos reigns—including a couple of ghosts trying to save their granddaughter. But as Gracie dances from problem to problem, she’s unaware the music has been orchestrated into a murderous symphony.

When a different melody reaches Gracie’s ears from a guitar played by the new tenant living in her garage apartment, her tension vanishes. She listens unseen, cocooned in the shadows on her patio, and wonders who he’s longing for—and how it would feel for someone to crave her that much.

She can’t dwell on those thoughts, however. Problems of murder and missing prisoners abound. To say nothing of the ghosts. No one ever said being a law enforcement consultant would be easy.

Bluebonnet Ballerina follows Jalapeno Cupcake Wench and is the second book in The Amazing Gracie Trilogy.

“I don’t even know where to begin. Oh, yes I do! With this.” Gracie pulled out her phone and found Donovan’s photo. She handed it across.

A smile spread across Ariana’s face. “Look at those eyes. Does this sexy hunk have a name?”

“Tell me you like him and he likes you and it’s not some kind of police thing.”

“Gracie.” Ariana motioned with her fingers for Gracie to tell her more, but Gracie kept her mouth shut. “Come on, spit it out.”

“What’s that supposed to mean?”

“It means that I met him on the job, but he wasn’t the reason I was on the job. Bastion sent me to a bakery—Jalapeno Cupcake—and Donovan was there helping his sister. She’s the owner and just had a baby.”

Ariana sipped her water. “Does he know what you do?”

“Is that why you think you don’t like him?”

Gracie shook her head. “He’s controlling. We went out once—probably not again.”

“Is he really controlling, or is that an excuse?”

“No excuse. A combination of thinking he can tell me how to do my job, spend my time, and even unwarranted jealousy.”

“The guy who came to look at your old apartment.”

“I see. Tell me about him.” She smiled again.

“My mother sent him.” 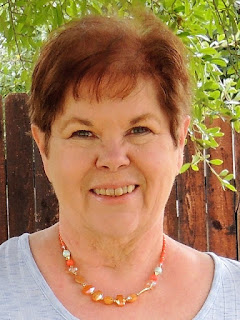 She and her husband live in San Antonio, the setting for the Amazing Gracie books, with two quirky herding dogs who still require help opening the food bin and the door.

You can learn more about Carol and be the first to know when the third book in the Amazing Gracie Trilogy will be released by visiting her website and subscribing to her newsletter at http://www.carolkilgore.net or connect with her on Facebook and Twitter.

Thanks for hosting me today! I'll be available for comments.

I would love to read your book.

Cool, Bridgett! I would love for you to read them, too ♥