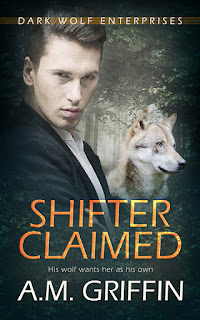 The big break Trudy Hollander’s small accounting firm needs has finally arrived, but unfortunately it comes with murder, mayhem and Kristof Farkas, a man she just can’t seem to resist. Even worse, Kristof is the CFO of Dark Wolf Enterprises—the one person who can pull the plug on the job that will take her company to the next level.
Then there are the assassins who can jump from three stories up and still be able to run away…
Kristof has no intention of giving in to his inner wolf and claiming Trudy. She’s human. Too fragile to withstand being a shifter’s mate. But the need to protect her is stronger than his resolve, and his desire is more powerful yet. He’ll fight with everything he has to keep her safe, both from those who would hurt her, and from himself.

Excerpt:
She was going to die. There was a man-wolf killer outside and a pilot-kidnapper in here.
Another glance outside and Kristof stood, as a man, watching her. A naked man. A wonderfully naked man.
She shook her head.
Wolf-beast. That’s what he is.
“Trudy. Open the hatch. I’m coming back up,” he yelled out to her.
Was she supposed to let him back in? He hadn’t said anything about that.
She chewed on her lower lip, waiting for an answer she couldn’t think of. If she opened the door, would he attack her? Was he a rabid beast who couldn’t control himself?
She shook her head. “No. You said not to open the hatch.”
“I meant don’t open the hatch for them.”
“Since I know your secret, are you going to kill me now?”
“Don’t be silly. It’s cold out here. Open the hatch.”
Should I let him back in?
“Are the pilots still alive?” he asked.
Her gaze shot back to the cockpit. “Yes. But not for long,” she yelled, loud enough for the pilots to hear.
“I’m naked and it’s about thirty degrees out here. Can you please let me in?”
“Wh-what about your super-human heating abilities? Aren’t you supposed to be so hot that’d you’d melt snow?”
He cocked his head to the side. “This is not some young adult story about Wolf-Shifters and sparkly Vampires. I’m freezing my ass off.”
“If he kills me, I’m going to be so pissed,” she mumbled to herself.
With the gun trained on the cockpit, she slowly walked to the hatch. There, she unlocked it and opened the door for him.
Kristof jumped and grasped the edge of the plane. With a grunt, he hauled himself up and through the opening. His body was streaked with blood. He looked…deadly.
She startled and fell back. She aimed the gun at him. “Don’t hurt me.”
“Trudy, darling.”
She stared at him. “Y-yes.”
“If you’re going to shoot me, I’d rather you aim for my head and get it over with quickly.”
Her gaze followed the path of her aim.
Aw shit.
“My other head,” he said softly.
Trudy dropped her jaw and she stared at him—all of him. He was big, thick and swinging gloriously in front of her.

A. M. Griffin is a wife who rarely cooks, mother of three, dog owner (and sometimes dog

owned), a daughter, sister, aunt and friend. She’s a hard worker whose two favorite outlets are reading and writing. She enjoys reading everything from mystery novels to historical romances and of course fantasy romance. She is a believer in the unbelievable, open to all possibilities from mermaids in our oceans and seas, angels in the skies and intelligent life forms in distant galaxies. 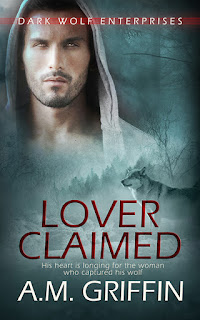 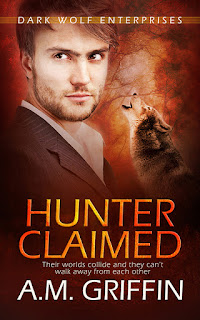