Out Now—Classic Felthouse: Stories from the Archive by Lucy Felthouse (@cw1985)

Out Now—Classic Felthouse: Stories from the Archive by Lucy Felthouse (@cw1985) 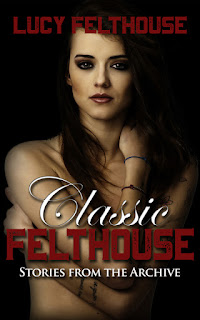 I couldn’t believe my luck when I heard what my next editorial assignment was. In fact I discreetly pinched myself to make sure I wasn’t dreaming.
My editor wanted me to write an article on Single Living Accommodation in the British Army. The British Army. Big deal, I hear you thinking. Perhaps I’d better explain. I have a real thing about men in uniform, I always have had. Stick me in front of a hot guy in uniform and I’m putty in their hands. So you see, I was rather excited at the prospect of being around all those sexy men. And even better, I was going to be paid for it. Talk about perks of the job.
The article was planned into an upcoming edition of the glossy women’s magazine I work for. The ‘careers special’ was designed to give the readers an insight into different industries and jobs within them.
I only had a few days to prepare for my assignment, so I did my homework and made lots of notes. I always like to be well prepared, to avoid the chance of messing something up and getting a bollocking from the editor.
Soon enough, the day arrived and I dragged myself out of bed at 6 a.m.—a chore in itself as I’m not a morning person—got my things together and took a taxi to the train station. I had strict instructions on where I had to change trains, where I should go and who I should look for when arriving at my destination. Corporal Matt Stokes would be there waiting for me. Given he’d be in uniform, I wasn’t too worried about recognising him.
When I boarded the first train and got settled into my seat, I grabbed my bag and pulled out a magazine. After reading the same page three times and realising I still had no idea what it was about, I gave up. I allowed my mind to wander. Would Corporal Stokes be attractive? Would he be tall and slim; small and well-built? Aloof, cheeky; who knew? All I knew for sure was that there was a good chance I’d think he was sexy simply because of what he was wearing. In my opinion, the uniform screams masculinity and sex. It hides what is beneath, leaving that to your imagination, but gives the impression of the wearer being rough and ready—just how I like my men.
After a speedy change of trains, I relaxed and let my thoughts wander for some time, until I heard the announcement that my station was the next one. I got myself ready, checked I had all my stuff together and perched on the edge of my seat. I was also aware that my daydreams had left me feeling more than a little horny, and as a consequence, my underwear was damp. I smiled to myself. I hadn’t even set eyes on a squaddie yet and my mind was in the gutter. Heaven knows what I’d be like when I was surrounded by hard male bodies, and the smell of sweat and spunk.
Perhaps I’d become immune to the charm of the uniform after seeing it constantly for a couple of days? Only time would tell. Five minutes to be precise; which was the time it took for the train to pull in at the platform and for me to get off and look around for my lift. As I’d expected, he wasn’t difficult to spot. As soon as I laid eyes on the six foot plus frame of Corporal Stokes, I knew I would never get bored of that uniform as long as I lived. Especially on him.