It's a book blast and there are prizes to be won. Like what? The author will be awarding a prize to multiple winners such as $50 Amazon Gift Cards, $15 Target or Groupon Gift Cards and other GCs and books to randomly drawn winners via rafflecopter during the tour. How cool is that? Want more chances to win? Follow the tour here: http://goddessfishpromotions.blogspot.com/2016/06/book-blast-drop-dead-handsome-by-mk.html

The Painted Lady Inn is open for business and limping along in the B and B world. A high school 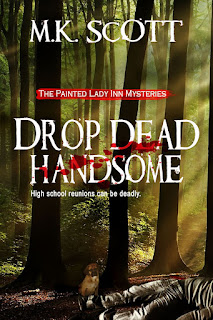 reunion package assembles Donna’s least desirable classmates, including the backstabbing cheerleader, her narcissistic high school crush, and Arnie, whose cheesy poem had everyone calling her, hot mama. It’s all something she liked to forget. These are the normal guests.

An octogenarian self-proclaimed sleuth, Father Christmas, a dognapping couple, and a pair who is copying everything in the Inn to set up their own competitive establishment rounds out the group. Maria, the sister-in-law, has a matchmaking agenda for Donna. Daniel, her brother, finds himself serving as a referee with one guest’s multiple wives.

High school reunions can be murder. Detective Mark Taber is on the trail of the murderer, when he isn’t interfering in a smitten Arnie’s determined bid to woo the no nonsense innkeeper.

Hadn’t she read something recently in a psychology journal that both men and women flirt to get better service? No doubt that was what the man was doing. Maybe she could use the same technique to move him upstairs. Never mind, she never had an inner vixen.

Smile. Her lips tugged up in one she deemed her innkeeper smile. Her brother nicknamed it ‘I’m trying not to belch’ expression. “Arnie, the silliest thing happened. You won’t believe it.” She giggled and tapped his arm.

His eyebrows went up, due to her heels, she had to drop her chin the tiniest bit to notice. His hands swept up in a prayer position before entwining his fingers together. “Oh really? Tell me more.”

Wow, this was much harder than she realized it was going to be. Appeal to his vanity. Where did that suggestion come from? It might work though. All she knew was she had to get him up two flights of stairs.

“I, ah…” She hesitated, not wanting to admit to a mistake that she did not make. “…put you in the wrong room.”

“You’re actually on the third floor.” This was bound not to please so she tried to sweeten the deal. “There’s a much better view from that floor and no street noises.”

She didn’t need to point out there were hardly any evening ruckus since most of the residents were snug in their homes by nine at night. What else could she add? Arnie stared without comment. The principle issue would be the stairs.

Here goes nothing. “A strong, virile man like yourself would have no problems with the stairs.”

His lips lifted and a slight sheen of interest enlarged his pupils. He dropped his folded hands, lifted one finger as if at an auction and discreetly bidding. “Would it be more private?”

“Absolutely.” She nodded. The selling point she needed. “Very. Down here,” she gestured to the room behind him, “you’d hear all the early birds and night owls roaming. You’d even hear me starting breakfast. Upstairs, you could sleep in.”

“Sounds good, but if I sleep in I might miss breakfast.” His nose wrinkled a little as if he found the idea amusing.

M. K. Scott is the husband and wife writing team behind The Painted Lady Inn Mysteries. 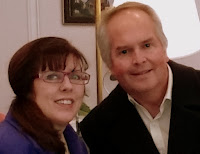 Morgan K Wyatt is the general wordsmith, while her husband, Scott, is the grammar hammer and physics specialist. He uses his engineering skills to explain how fast a body falls when pushed over a cliff and various other felonious activities. The Internet and experts in the field provide forensic information, while the recipes and B and B details require a more hands on approach.  Morgan’s daughter who manages a hotel provides guest horror stories to fuel the plot lines. The couple’s dog, Chance, is the inspiration behind Jasper, Donna’s dog.  Murder Mansion is the first book in The Painted Lady Inn Mysteries. Overall, it is a fun series to create and read. Drop Dead Handsome is the second book in the series. Killer Review should be out in October 2016.

Thanks for hosting Drop Dead Handsome.