Blurb Blitz ~ A Wedding at Meadows Shore by Eva Charles

It's a blurb blitz!! What book? A Wedding at Meadows Shore by Eva Charles! Want to know more? Keep reading. Want to win something? Then make sure you enter the contest. What's up for grabs? Eva Charles will be awarding a $50 Amazon/BN GC to a randomly drawn winner via rafflecopter during the tour. Follow the tour here: http://goddessfishpromotions.blogspot.com/2016/03/blurb-blitz-wedding-at-meadows-shore-by.html

A Wedding at Meadows Shore
by Eva Charles

Meadows Shore is the childhood home of the five Clayton sisters and the six Harrington brothers, the 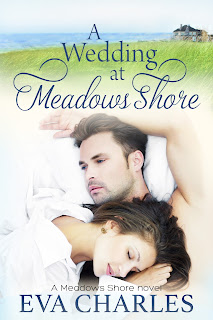 family seat where these irresistible characters gather regularly…or whenever they need the comfort of Portuguese home cooking and the love and wisdom of elder women.

After Sophie Clayton catches her husband in bed with a young intern, she creates a new life for herself as the executive director of a failing domestic violence agency. It’s the perfect job for a woman born to fix everything. A friend’s broken heart, a tattered agency, a flat tire—she’ll roll up her sleeves and make it as good as new. Sophie rarely encounters anything she can’t fix…until she meets the devastatingly handsome and insufferably arrogant, Max Parker. One of Boston’s most eligible bachelors, he’s never without a stunning young woman on his arm and in his bed.

When Sophie’s forced to deal with Max, sparks fly, and somewhere in the crossfire of verbal daggers and clever barbs, she discovers his darkest secret.

And now for an excerpt!!

His voice took on a husky, seductive quality. “The women I date aren’t interested in my body, Sophie. What interests them is how I pleasure their bodies.”

She stared deep into his icy blue eyes and snickered.

Max never missed even the smallest of details. They were often the difference between success and getting your hat handed to you. Tonight, he noticed Sophie’s eyes betray her, even as she mocked him. Her pupils were dilated, the rich, whiskey-colored irises nearly overtaken by black. I have her attention.

Embolden by her body’s reaction, he took a step closer. He was so close that if she’d been breathing, her breath would’ve warmed his skin. “I can bring much more to your bed than my father does. So…much…more…” He drew out the words, emphasizing each in a voice that oozed sex. “And though I’m not an easy man to impress, I’m sure you’d have no trouble persuading me to finance your agency. None at all,” he drawled.

Neither of them spoke for a long moment, maybe two. The air was charged. The silence dangled between them like a ripe peach, fragrant and swollen, tempting the weakest among them to reach for it first.

“What do you think?” he asked softly, ending the silence.

While waiting for her response, a calculated kind of wait, he resisted the urge to lift his hand and run his fingers through the strands of hair that’d come loose, softly framing her face.

“I think you really are an ass.”

With that, she turned and walked away. Leaving him to gape at her magnificent back.

Eva Charles is the author of the multi-titled Meadows Shore Series that chronicles the lives and loves of the Clayton-Harrington family. She invites you to visit their beloved Meadows Shore nestled in the charming seaside town of Fair Harbor, where you’ll enjoy love, laughter, loyalty, and an abundance of mouth-watering food, Portuguese style.

After being a confirmed city-girl for more than thirty-five years, Eva moved to beautiful western Massachusetts in 2014. There, she found herself living in the woods with no job, no friends (unless you count the turkeys, deer, and coyotes roaming the backyard), and no children underfoot, wondering what on earth she’d been thinking. But as it turned out, it was the perfect setting to take all those yarns spinning in her head and weave them into a romantic tale.

When she’s not writing, trying to squeeze information out of her tight-lipped sons, or playing with the two cutest dogs you’ve ever seen, Eva’s creating chapters in her own love story.

Thank you for hosting A Wedding at Meadows Shore today! I'll be available to answer questions from readers for much of the day, although my internet service will be spotty at times. I'll also leave a question for readers: Did anyone do anything special this weekend?

Thank you for sharing :)

Victoria, You're so very welcome!