This post is part of a virtual book tour organized by Goddess Fish Promotions. Vanessa Morgan will be awarding a $10 Amazon or B/N GC to a randomly drawn winner via rafflecopter during the tour. Click on the tour banner to see the other stops on the tour. 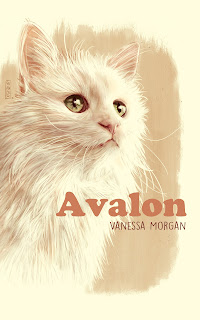 Some cats need nine lives to make a difference. Avalon only needed one.

From Amazon bestselling author Vanessa Morgan, Avalon is the heartwarming and once-in-a-lifetime love story of a girl and her neurotic Turkish Van cat.

With humor, the author details how Avalon made other creatures cringe in distress whenever he was around, how he threw her dates out by means of special techniques, and how he rendered it almost impossible for her to leave the house. Avalon was so incorrigible that even the landlord ordered to get rid of him. But beneath Avalon's demonic boisterousness, Vanessa recognized her own flaws and insecurities, and she understood that abandoning Avalon would be the worst she could do to him. Thanks to her unswerving loyalty, Avalon transformed into a tender feline and even landed a major role in a horror movie. In turn, Avalon made it his mission to be there for his human companion.

Avalon is a memoir for anyone who has ever been obsessively in love with a pet.

Around three o’clock that night, Avalon was fed up with the strange man in his bed. He plonked his rear down on Gilles’ pillow, complaining fretfully in his ear while tapping him on the face.

After nearly an hour of incessant wailing and poking, more drastic measures were required. The new solution: pushing Gilles out of bed.

Climbing back under the covers wasn’t an option. Unable to sleep, Gilles got up. "I guess I didn't pass the test."

"Give Avalon some time. Maybe he was just irked because you took his side of the bed."

But Gilles had already understood that this wasn't going to be a one-time event.

For several minutes, Gilles and Avalon sized each other up. Then Gilles said, "I’d better leave the two of you alone now. It’s clearly what the little guy wants."

I swear I could see Avalon smirking when Gilles put on his jacket and left.

Instantly, Avalon leapt onto me, and compensated for the evening before. He entered a kiss-induced trance. This cat was all about exclusivity, and when granted that exclusivity, his love was immense.

"Are you really that happy that Gilles is gone?"

In reply, Avalon looked at me with swoony eyes and purred loudly, then swatted out his paw to urge me to continue to pet him, which I did.

A phone call interrupted our tender moment. It was Gilles.

"There won't be any train to Brussels for hours," he said. "Is it okay if I come back to your place for a while?"

"Of course." His return would offend Avalon, but I couldn’t possibly leave Gilles outside in the rain for several hours.

As soon as Gilles appeared at the front door, Avalon’s pupils widened to a pitch black.

Let's see who's the boss here, he seemed to be thinking.

Being a cat of action, Avalon went through his usual attention-seeking routine: making a selection of irritating noises, scratching the wallpaper, and pushing objects to the ground.

When that didn't work, Avalon opened Gilles' overnight bag and threw out a piece of clothing. His eyes so dark and evil they could be gateways to hell, Avalon stared at his adversary and waited for a reaction. He then pulled out a box of gel wax. Again, he looked up at Gilles to make sure he understood that all this bungling was meant to get a message across. A third object followed, then a fourth, a fifth, a sixth, until there was nothing.

Hell-bent on winning the game, Avalon took Gilles' coat in his mouth and towed it toward the front door. There, he used his right paw to tap the keys hanging from the wooden doorframe.

Avalon’s message couldn’t be any clearer: there was room for only one man in my life. A feline one. 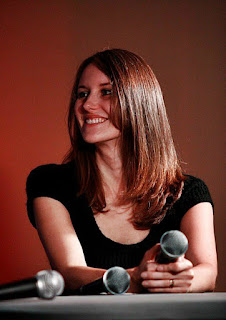 Vanessa Morgan is the editor of the movie reference guides When Animals Attack: The 70 Best Horror Movies with Killer Animals, Strange Blood: 71 Essays on Offbeat and Underrated Vampire Movies, and Evil Seeds: The Ultimate Movie Guide to Villainous Children. She also has had one cat book (Avalon) and four supernatural thrillers (Drowned Sorrow, The Strangers Outside, A Good Man, and Clowders) published. Three of her stories have been turned into movies. She has written for myriad Belgian magazines and newspapers and introduces movie screenings at several European film festivals. She is also a programmer for the Offscreen Film Festival in Belgium. When she's not working on her latest book, you can find her reading, watching movies, eating out, or photographing felines for her blog Traveling Cats.

The French version of the book can be purchased at Amazon for only $0.99.

Thank you! Good luck to everyone who enters the giveaway.