It's a tour and this book looks fantastic. Come check it out. You'll want to stick around for the interview and the prizes. Like? One randomly chosen winner via rafflecopter will win a $50 Amazon/BN.com gift card. So get to commenting and entering! Want more chances to win? Then follow the tour: https://goddessfishpromotions.blogspot.com/2021/09/fs-nbtm-golden-shana-chase-by-by-p-von.html 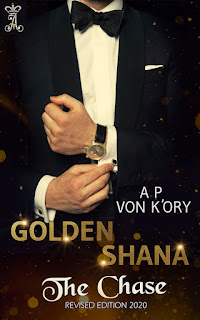 An evening at the La Scala in Milan twirls the lives of five people into a web of rivalry, intrigues, heartaches, obsession, murder, loss, and revenge.

Love, a word Roman can hardly spell, hits him when he sees Shana one evening. She’s the first woman not dropping to her knees at his mere presence. Used to getting whatever he wants, he chases her. Only to discovers that she prefers the girls. Roman can’t let that deter him. But is he for once up against his own comeuppance? At any rate, he needs assistance, which comes in the form of Alyssa, Shana’s BFF. Trouble crops up when Alyssa is all too ready and willing to drop on her knees for him.

Roman can't get anywhere near Shana on his own. Would he start anything with Alyssa as long as this finally leads him to meet Shana in person?

Then there’s Marie, his current companion, who has a life-changing surprise for him.

Roman: I never chased after a woman. Then I caught a glimpse of the woman I would kneel for, but didn’t even know her name. Heck, I determined to find her if it took me the rest of my life.

Shana: He stood in the room with her. The frisson in the currents freaking between them knocked her senseless. The mutual force of predator and prey, blasting into her core ... her soul ... Danger. Keep far away from him


Now for an interview!!
If you could apologize to someone in your past, who would it be?

I think it would be my mother. In my young years, I blamed her for situations in my life that she had no control over. I failed to appreciate that she was a creature of her time and nurture. Unfortunately I lost her in a car accident when I was still too young to even entertain the concept of apologizing to anybody.

If you could keep a mythical/ paranormal creature as a pet, what would you have?

I’d simply love to keep the god Shiva as a pet. According to Hindu myth, this god is both the destroyer of the world and one of its creators. This powerful being fights demons and protects the world, but also walks with demons at his side and fights with other gods. Shiva is best known for his dancing, but again for very different reasons. One dance holds the universe together, the other completely destroys it.

How do you keep your writing different from all the others that write in this particular genre?


One of the things that make my writing unique is that I tend to write what I would also love to read – as opposed to “writing to market”. I sprinkle some general knowledge into my writing where it’s appropriate. Some of my readers love me especially because of this. For example, in the fourth volume, Golden Shana: The Deception, when Shana shows Roman her rooms in the family home, he notices the frescos on her ceiling depicting the Battle of Thermopylae that Kind Leonidas of Sparta fought against King Xerxes I of Persia. I have Shana retell a bit of the battle and how her father used the story when he was teaching her to run her share of the Lindqvist Group of Companies and engage in corporate wars. I try never to confine my couple to sex, sex, and more sex please. I get them to work and live like everybody else in real life. You don’t get to be a gazillionaire but merely having fun and pleasure.

What are the best and worst pieces of writing advice you ever received?

My personal one is “write to market”. If I did that, I’d be offering my readers something I wouldn’t pick up, pay for and read. I’d feel like cheating them. Besides, how can I write something well enough if I’m not wholeheartedly committed to and love what I’m creating?

Are the experiences in this book based on someone you know, or events in your own life?

Yes, it is very much based on events in my own life and the lives of those near and dear to me. Even the ethnic diversity reflects my own family’s Babylonian composition!
Now for an excerpt!!

“Are you a bloody dyke or not, Shana?” I was ready to hit the fucking roof.

“It’s really none of your business. But Alyssa is—”

I strode purposefully to her, pulled her to me, raked one hand into her lustrous hair at the back of her neck, grabbed a handful of it firmly, and tilted her chin up with my other hand. I bent and kissed her hard on the eat-me-whole lips. Kissed her savagely, without trying to push my tongue into her mouth. I simply licked and sucked with force. She smelt of manmade scent and sultry womanhood.

As her lips began to yield, to slightly part, to surrender to me, to let me take full possession of her mouth, I stopped kissing her and pressing against her. I jerked her head away from me by my handful of hair and locked my eyes with hers again.

“Yes?” as imperiously as she had been. I saw her confusion.

She whispered, “Oh heavens,” and closed her eyes.

“Indeed. Look at me,” I ordered in a low dark voice, torn between a million shades of mad and frustrated.

She opened her eyes again in blinks. “Roman. Alyssa has fallen in love with you, one. She’s my best friend since childhood, two. And yes, she’s my lover too.”

My temples worked. But you’re a man’s woman! “Not any more, Shana. From now on, every single bit of you belongs to me. You’re. My. Woman.”

She shook her head, probably denying my statements, probably perplexed.

“You. Are.” I still held that bunch of hair at the back of her head in a firm fist.

“Roman, I don’t mind Alyssa having men in her life. But—”

“Christ, Roman, men don’t work for me since—”

“One just did perfectly with no more than just a kiss, Dr Lindqvist.”

I released her. Turned away and walked out. 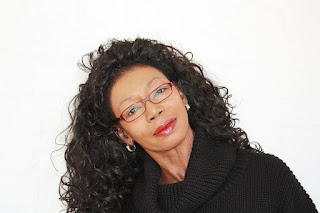 A P von K’Ory writes the kind of books she herself would like to read and is passionate about, whether romance, psychological thriller or nonfiction. She is the winner of six awards from four continents, the last one being the Achievers Award for Writer of the Year 2013 in the Netherlands. The Selmere Integration Prize was awarded her in 2014 for her engagement in helping African Women in the Diaspora cope with a variety of domestic and social problems. The Proposal, a short story, won the Cook Communications first prize in 2010 and is published in an American anthology Africa 2012. In 2012, she won the Karl Ziegler Prize for her commitment to bring African culture to Western society in various papers, theses, and lectures. Again in 2012, her book Bound to Tradition: The Dream was nominated for the 2012 Caine Prize by the Author-me Group, Sanford, and in 2013 she was shortlisted for the Commonwealth Writers Prize.

Von K'Ory is married to an aristocrat and politician of Franco-German descent, has a large extended  family. She lectures Economics and Sociology in Austria, Germany and Switzerland. She’s migratory and – weather willing – lives in Germany, France, Cyprus, and Greece.

She may be reached at any of the following:

Sign up for news about me & the family, ARCs & Freebies:

Want to join up and receive ARCs from my next (or current) books? Please join the discerning readers at the link below: https://www.facebook.com/AkinyiReadersReviews/

It would be lovely if you could Like the book page and read the latest interviews and news about Shana and Roman on Facebook at:

It would be equally wonderful if you could Like my Author page and read more about Shana and Roman new releases, cover reveals and what I’m up to lately on Facebook at:

Thank you for sharing your interview and book details, I have enjoyed reading about you and your work and am looking forward to reading your story

I enjoyed the interview and the excerpt, A.P. and The Golden Shana sounds like a great book and I love the cover! Thanks for sharing it with me and have a splendid day!

Thank you so much for hosting my book tour, Wendi Zwaduk. I truly appreciate it.

I enjoyed the interview and excerpt.


Thanks to all of you, dear readers Bea LaRocca, Rita Wray, Sherry, and Stormy Vixen, for giving me your time and thoughts about my work. I've noticed some of you have been following my book tour for some time now, which makes me feel very humbled and honored.


Thanks, Kim, for taking the time to read the excerpt.