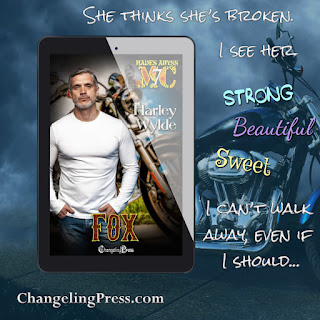 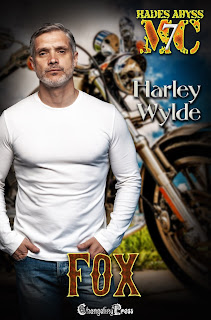 Raven -- I learned the hard way not to trust anyone. First the men who’d hurt me, and then my mother when she turned her back on me. I had no one. Was it any wonder I didn’t think I had a reason to keep living? A good Samaritan had other ideas, landing me in a psychiatric hospital. Too bad the guards were every bit as evil as those men I’d trusted.

I thought I’d die alone. Unwanted. Unloved. Forgotten. Until the Hades Abyss MC came to take me away. They claim my father sent them, except I’ve never met him. Don’t even know his name. I’d try to run, but what’s the point? Besides, there’s one man who makes me feel safe. Fox. It doesn’t matter that he’s older than me. When he holds me, I know nothing will ever hurt me again. I just didn’t count on losing my heart to him.

Fox -- Breaker brought Hatchet’s daughter to the clubhouse, and the moment I looked into those vacant eyes, I knew she’d been badly broken. Some part of me wanted to fix her. Put the pieces back together. Watch her eyes light up and see her smile. She thinks she’s dirty, that no one will ever want her. She’s wrong. I want her. I even want the baby growing inside her.

Never thought I’d find the woman meant to be mine. Now that I’ve had Raven in my arms, chased away her nightmares, kissed her tears away, I know I can’t let her go. I’ll make her mine -- the baby too -- and I won’t let anyone stand in my way.

WARNING: Fox is part of the Hades Abyss MC series. Be warned there are adult situations and language, violence, darker themes that may trigger some readers like suicide and assault. Guaranteed Happily-Ever-After, no cheating, and no cliffhanger!

Get it here ⬇️

Get it August 13th at Changeling Press: https://bit.ly/3kuCdsN

I felt the burn of a tear slip down my cheek and before I knew it, I was in Fox’s arms and sobbing. I hadn’t cried in so long. It felt satisfying and horrible at the same time.

“Surge, I need you and any other hackers to look into Balmoral. See what you can find so we can bury those fuckers,” Spider said. “Raven, I don’t have a place for you to live on your own. Breaker brought you here. Do you want to stay with him?”

I sniffled and looked up at Fox. A slight smile kicked up the corner of his lips and he ran his hand over my hair. “She can stay with me. I have an extra room.”

“That what you want, Raven?” Spider asked. “To stay with Fox?”

I nodded, not looking away from the first man to ever make me feel seen. Understood. My heart raced and I trembled, but it wasn’t from fear. Not this time. For once, I felt like things might be okay. I didn’t know the man they claimed was my father, but if they trusted him, I’d at least meet with him. Until then, I’d stay with Fox. I could feel it deep in my gut that he’d keep me safe. Possibly even from myself. I couldn’t promise the dark thoughts wouldn’t return. I might always have days where I wanted to end it all.

The thought of staying with Fox made me feel warmer inside. The shadows were still there, pressing in, but they were held at bay. If latching onto Fox would make things better, even a little, then I knew I needed to hold onto him.

WHAT ARE REVIEWERS SAYING?
“This was a great, yet hard story. Raven had to over come such a hard life to find her happily ever after. She is such a survivor and deserves the love of her old man, Fox and her father, Hatchet.” – CarlyCollins, BookBub Review (5-stars)

“What a couple, Fox was a great match for Raven… I can’t wait to see what comes next!” – JulieWinslett, BookBub Review (5-stars)

When Harley's writing, her motto is the hotter the better -- off the charts sex, commanding men, and the women who can't deny them. If you want men who talk dirty, are sexy as hell, and take what they want, then you've come to the right place. She doesn't shy away from the dangers and nastiness in the world, bringing those realities to the pages of her books, but always gives her characters a happily-ever-after and makes sure the bad guys get what they deserve.

The times Harley isn't writing, she's thinking up naughty things to do to her husband, drinking copious amounts of Starbucks, and reading. She loves to read and devours a book a day, sometimes more. She's also fond of TV shows and movies from the 1980's, as well as paranormal shows from the 1990's to today, even though she'd much rather be reading or writing.

You can find out more about Harley or enter her monthly giveaway on her website. Be sure to join her newsletter while you're there to learn more about discounts, signing events, and other goodies!