Book Blast ~ How to Rope a Rich Cowboy by Anya Summers

This post is part of a virtual book tour organized by Goddess Fish Promotions. The author will award a randomly drawn commenter a $25 Amazon/BN GC. Click on the tour banner to see the other stops on the tour. 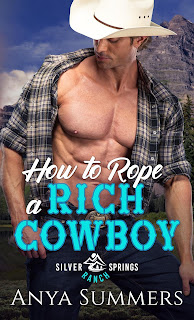 Colt Anderson is burned out. Every part of his daily life has become a tedious chore. He cannot remember the last time he took a day off or, better yet, felt a woman’s willing surrender. And it’s just his luck that on his first day off in ages, he runs into a sexy squatter on his property, never expecting that single interaction would alter the very fabric of his world.

Still, he cannot seem to stay away from the sultry scientist, Avery. Colt feels bad for her, worries that she is running from something, and decides to cover her stay at the ranch. After all, he owns the place and has plenty of cash. Although that tiny little detail is a secret he plans on keeping to himself. It is addictive having a woman look in his direction and not see dollar signs for a change.

Because when Avery casts those goddess eyes his way, he’s just a man, a man she craves and submits to body and soul, like he’s her man, and his longing for her has him tied up in knots. With trouble and danger drawn to her like magnets, Avery pulls out his protective, dominant nature. The woman needs a keeper, and he’s the perfect man for the job.

Now he has less than two weeks to convince her to stay, to make her fall for him before she discovers he’s rich. But will she hate him when she discovers his deception?

What the hell? Who was she, and what was she doing here?

Colt didn’t waste time, not with the hail and advancing threat of the storm. The woman even glanced his way, her eyes luminescent in the rain, as they trotted up to the side barn.

Colt dismounted, shoved the barn gate open, and led Tank inside. Outside, the storm raged, and thunder rattled the small barn. Colt spent the next few minutes getting Tank bedded down for the storm’s duration. He removed his saddlebags, the saddle, and sodden blanket. Each barn was equipped well, with extra horse supplies should they be needed. He had never been so glad for the foresight. He brushed Tank off then grabbed one of the dry blankets from the storage chest. Colt made sure he had fresh water in the stall and added a few scoops of grain from the supply he’d brought with him. He hung the saddlebag with Tank’s grain up above the storage chest and away from the stall. Tank, god love him, would eat every bite in the feed bucket. And if they had to stay the night, Colt wanted to make sure there was some for later that night and in the morning before they headed back down.

With his second saddlebag with his lunch, keys, and satellite phone tossed over his shoulder, and his rifle in the other, he strode out of the barn, making sure to lock the door behind him. It would keep Tank safe from any predators in the area looking for a meal.

The woman was still there, carting in some monstrosity of a telescope that was damn near as big as she was. Rain and hail battered Colt. He was thankful the brim of his hat kept the rain out of his eyes. He glared at his squatter.

“Who the hell are you? This is private property,” he yelled loudly with the thunder booming.

She bared her teeth. Her eyes dominated her face. They were a rich mahogany that glowered with venom, and she snapped, “If you’re just going to yell at me, go away. I need to get this stuff inside before it becomes waterlogged and useless.” She struggled with the equipment. Her hands slipped. The weight of it was almost too much for her slight frame.

She might be a squatter, but Colt wouldn’t kick her out in a storm like this. Squatter or not, he wouldn’t have her death on his hands, even if her attitude made him want to wring her elegant neck.

“Leave it. This storm is only getting worse,” Colt barked, his fury rising in undiluted potency. He waved his hand in the direction of the ominous clouds as they turned day into night. The woman was risking her neck for a bunch of stuff that would be worthless if she lost her life in the process.

“All this equipment costs more than your damn horse. If you’re not going to help, at least move out of my damn way so I can get it inside,” she snarled, fighting against the rain and wind as she struggled.

The urge to throttle her swept through Colt. He glanced skyward and back at the damn fool woman.

“Shit.” He moved past her up the stairs, and set his saddlebag and rifle just inside the door. Then he jogged down the stairs to where she stood, struggling with the telescope. He gripped the opposite side, and lifted the slick device up. Shocked by its weight, he wordlessly helped her carry it up the porch stairs and inside, where she already had a few pieces standing throughout the studio cabin.

Working together quickly, they hauled every piece of apparatus inside, fighting the wind and rain. What was she, an astronomy club gone wild?