New Release from Victoria Blisse ~ Good Manors (And Boy Is It Hot!!!!)

Set in an English country Manor, Victoria’s novel has a uniquely British feel and gives a glimpse behind the scenes of the aristocracy including its seedier side. Told from the point of view of both of the main characters, you see through the eyes of both the secret keeper and the one kept in the dark.

Here's the official word about the book ~
Mallard Hall plays host to games of submission and Dominance for one unique couple, but do the secrets of the past threaten the new bonds being forged? 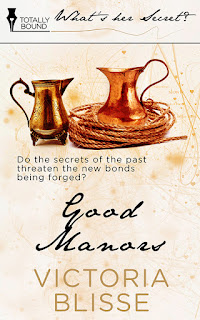 India Grace, a respected journalist, is assigned to the estate for a behind the scenes look at how it runs. It is the last place in the world she wants to be. Back when she was young and naïve she took a photo of old Lord Mallard, which led to her success and his downfall. She carries the guilt with her to the location and it’s constantly in the back of her mind when she meets the hall’s latest owner, Xander Patrick.
Xander’s father died when he was only thirteen, and he doesn’t hold many good memories of him. He helped his mum build Mallard Hall back up, and since her death struggles to keep it going single-handedly. The last thing he needs is a meddling journalist poking into estate business, especially when the meagre profits are mysteriously disappearing.
The two try to keep their distance but find themselves drawn together in many unexpected ways. A meal leads to an investigation of secret passageways and from that India and Xander explore their attraction, using different rooms of the hall for their kinky games.
In the end India’s secret will have to come out, but will it bring the couple closer together or tear them apart?
Reader Advisory: This book contains scenes of light BDSM and voyeurism.
General Release Date: 15th September 2015 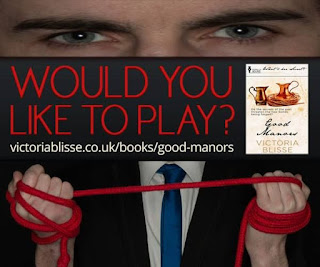 Reviews:
“Pure Blisse!” Karen Shenton
“The sex scenes are off-the-charts kind of HAWT…” The TBR Pile
“Full of sexy encounters and a gut wrenching confession Good Manors is a great page turner.” Alison Grieg
“I loved the writing on this book, it was engaging and sexy, with a hint of intrigue.” Momof3infl

About the Author ~
Victoria Blisse is a mother, wife, Christian, Manchester United fan and award winning erotica author. She is also the editor of several Bigger Briefs collections, and the co-editor of the fabulous Smut Alfresco, Smut in the City and Smut by the Sea Anthologies.

Victoria is also one of the brains behind the fabulous Smut events, days and nights dedicated to erotica, fun and prizes. Check out http://ilovesmut.uk  for more details.

She is equally at home behind a laptop or a cooker and she loves to create stories, poems, cakes and biscuits that make people happy. She was born near Manchester, England and her northern English quirkiness shows through in all of her stories.


To find out more check out http://victoriablisse.co.uk
Posted by Wendi Zwaduk and Megan Slayer at 12:00 AM